With Fibresand building a reputation in the UK, and Denmark and Luxembourg heralded a huge success, my boss’s attention was drawn further afield, and he turned his attention to the west, and the huge market of the United States of America…

My trips to America had an unexpected benefit though; on my first stay I was totally bewildered, and the plant had got stuck in customs in New York for two weeks. In fact in the end they sent me home and flew me back two weeks later.   On that first trip, I had been assigned to a mechanic, a guy called Jamie Birdsall, who would assist me building the plant up  It was quite fun – especially when I asked for a spanner.  “What’s a span-ya” he said.    I showed him  a small one I had smuggled across with me on the plane – but I needed a much bigger one.  “Oh, you mean a WRENCH”.  “Hey Guys – look what I’ve got – a SPAN-YA” 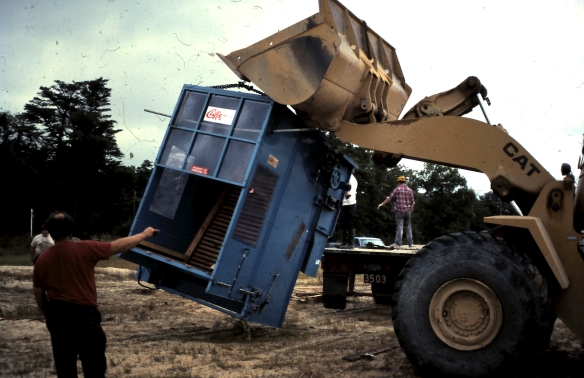 Jim (Jamie) guiding the equipment off of the trucks.

It was a bit of a worrying time – we had found out earlier in the year that Sue was having twins, and they were due about eight weeks from the date I was supposed to return from the USA, and everyone knows that twins can be unpredictable.  Sue begged me not to go, but the MD promised he would fly me home the minute there was signs of trouble.  Not daring to argue, I relented and went.  I knew if there was trouble, the likelihood was that they would be born before my plane touched down in the UK.

Luckily we had good friends in the UK who made sure she was well looked after while I was gone.

Every night after work, I would say goodnight to Jim (as I called him – that’s the name he had on his work overalls, and no-one corrected me) and then the manager would drop me at the motel.  And that’s where I stayed every night on my own.  Sitting in the diner with the old gal Phyllis behind the counter, who would ply me with different desserts or, on one occasion, used me as the guinea pig for a new hot chocolate machine they had installed.  I put on a whole stone in weight during the two weeks I was there. 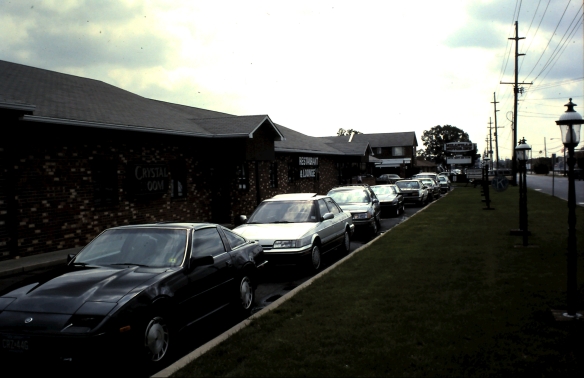 After about three or four days, Jim asked me what I did at night, and I told him, and he was appalled.  I told him that one evening I had  tried to walk to a mall he had told me about but after about three miles I arrived at an intersection of a freeway, no mall in sight, and decided it was safer to turn back.   Walking around in the suburbs of the states is not like a country walk in Derbyshire.  Anyway, Jim came back later in the day and said he had been speaking to his wife and she said it was shameful that I’d been left like that, and they arranged to pick me up and go out for dinner and go to the mall.  I had never been in an American mall, and we had NOTHING like them in the UK.  K-MART, WALLMART, Pennies.   Toys R Us, before Toys R Us came to the UK.   I was gobsmacked.  And as the dollar was at over $2 to the pound, things were ridiculously cheap.  I had suitcases full of toys for Stacey, stuff that we couldn’t get in the UK – She had a Teddy Ruxpin talking bear and a Grubby animated doll (that’s the name, not the condition of it) about a year or more before they came to the UK.  And for about half the price.

And so I met Jim’s wife Marie, and their little son Todd.   And a long friendship was born.

And that is another story all by itself.