Today I am recalling an event that changed my outlook on life slightly.   And made for a great funny story for years to come.  If I’ve told it before, I apologise…

It started in Philidelphia, Pennsylvania.  I had just completed my first Fibresand project in America, a three week stint commissioning a new fibresand plant in Vineland New Jersey, and I was at last on my way home to be with your mum as she neared the end of her pregnancy with the twins.  I was about 15 minutes out of Heathrow airport, sat in the window seat of a Boeing 747.

For an avid plane lover, this was a dream come true, sat on THE largest passenger plane at that time.   It was the new 747-400 stretched version, with a cabin so wide and spacious it felt like you could hold a football match in it. 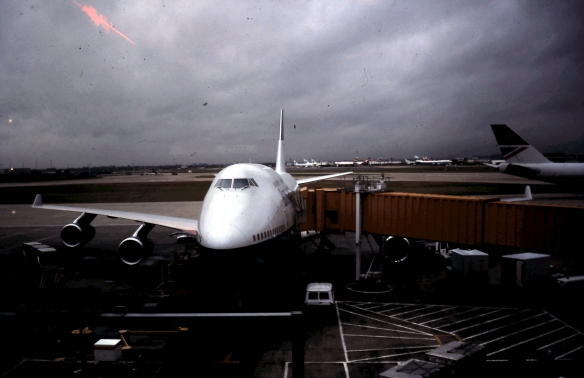 I was flying the red eye – so called because you took off in the day, flew through the night and caught up with the sun rise – the red eyes are a symptom of lack of sleep and staring at the bright brilliant white clouds reflecting the harsh suns rays right at you through the windows.  And like so many foolish people before me, I sat and watched the sun rise up over the white clouds below, and the ever changing colours of the clouds and the differing blue hues of the sky were just spectacular.  And sure enough, suddenly I found myself with itchy burning eyes, which of course turned even more red as I rubbed them. 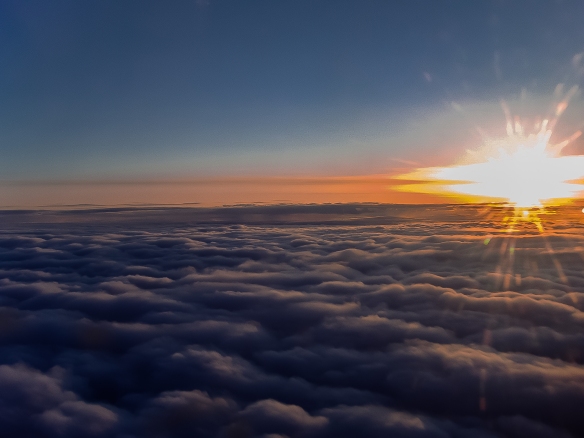 Nowadays, you learn to sacrifice the view and keep the blinds down as long as possible.

I should have realised trouble was brewing as we arrived into London.   The flight path follows the Thames straight over the city and out to the west where Heathrow sits just on the M4.   As we approached, we unexpectedly veered away and took up a holding pattern over the airport.

The pilot came on and apologised, noting that the tarmac on the runway had softened with the high temperatures and it wasn’t safe to land.   We circled for about 45 minutes and then we received the announcement that we were going in.   Everyone I think was a little apprehensive, but the touchdown was uneventful and we all breathed a silent sigh of relief.

In those days, your main flight included a free regional connection, so I was quickly on my way from the arrival gate to my next flight, a British Midland airways ATP back to East Midlands, where one of my lab technicians would be waiting to drive me home.

There is a world of difference between the slow lumbering 747 and the horrendously noisy turbo prop, but I loved it – the British Midland flight back home would only reach 8,000 ft which gave some seriously good views of the capital as we departed, and up over the English countryside as we flew back north.   I would soon learn that flights into Heathrow invariably flew over the city, and back at EMA, you often flew over Donnington racetrack and got a great aerial view of the iconic Dunlop bridge.

I was somewhat disappointed to find my return flight home wasn’t on my favourite ATP, it had been franchised to a Norwegian airline, “Busy Bee” airlines, and it was being operated on the slightly smaller Fokker F27 Friendship,  a little smaller than the normal BM flight.

I found myself sat in the aisle seat adjacent to the left engine, next to a young guy in the window seat dressed in a British Midlands air crew uniform.   The crew consisted of two attractive blond Norwegian stewardesses, who welcomed us on to the flight with their cute Norwegian accents.

With the safety demo out of the way, the flight took off for the short one hour flight back to East Midlands.   Even on these regional flights, you would get a small meal and drinks service, which is amazing considering how little you get these days.

It was a full flight, and I noticed a particularly rowdy guy in seat 3C up in front.  He was tucking into the free booze, and I must have counted at least four large whisky’s on the way up, but soon he seemed to fall asleep – or pass out, I was never quite sure which.

There were no worries about security in those days, and the cockpit door was wide open and I could see clearly the two pilots and huge dashboard of controls on the flight deck.

I got chatting to the guy next to me and he told me he was on his way to the British Midlands training facility in Edinburgh to complete his final bit of training before becoming a fully trained steward – the dreaded evacuation drill.   He didn’t come across as being the calming, confident person you might wish to have in charge of a crisis.  But then, I suppose that’s why they train them.

As we approached EMA, the girls started collecting up the glasses and clearing away ready for landing, when it happened:

There was a tremendous bang, followed by a gush of thick black engine oil spraying all over the window to my left, next to the trainee.

The overhead fire bells started to ring over the pilots’ heads.

The plane dropped vertically about 100ft.  It didn’t dive, it just seem to fall.

The right engine suddenly blasted up to full power, a terrific noise pouring into the cockpit.

It must have lasted seconds,  but seemed an eternity.

The engine on my left stopped spinning.  The engine on the right calmed down a bit as the pilots stabilised our height and eased back on the power.

The stewardess had a quick word through the cockpit door and then grabbed the microphone:

“Attention, Please note that vee are experiencing some technical problems and ze captain has been forced to sweech off one of ze engines, but he says do not vorry, the plane can still fly on one engine”

The guy in 3C came out of his drunken stupor and called out “Bloody good job, he only has one engine left!”

I looked at the now trembling trainee, who was clinging to the armrests with all his might.  “Looks like you might be doing that evacuation quicker than you expected” I said in my normal unpanicked, calm and light hearted manner.  It didn’t help.

We were told to prepare for a crash landing and the stewardess went through the brace position before collecting the final glasses.  3C wasn’t letting go of his glass, instead arranging a refill.

The plane landed uneventfully, and the only give away to the emergency were the three fire engines chasing up behind the aircraft as it rolled down the hot tarmac and came to a halt still in the centre of the main runway.

With the fire crew pronouncing that everything was safe after a thorough inspection, we got off the plane still on the runway and climbed aboard a waiting bus.

On the way through the cockpit door, the two blondes were waiting to say goodbye.

“Zank you vor flying busy bee airways, we hop you vill fly again with us soon” they repeated to everyone as they descended the steps.   Until the guy from 3C got to the door.

The stewardess beamed at him.  “Zank you vor flying busy bee airways, we hop you vill fly again with us soon” she repeated to him.

He turned around sternly, and said in a slightly slurred voice “You ARE joking aren’t you?  You will never catch me on a fokker like this again”.

The stewardess just kept smiling.  The rest of us still on the plane laughed out loud.

Back home, the incident hit the local news and TV, but apparently it had all been a false alarm.  Strange, it didn’t seem so at the time.

The technician who picked me up had taken a photo of the plane when they finally pulled it to the terminal, and I framed this along with the newspaper clipping and my paper luggage tag from the flight, for posterity.

I also took out life assurance before the next works trip…

So that is my claim to fame.  Let’s hope it’s my first and last!