Life is full of sudden urges, sometimes fuelled, rightly or wrongly, by nostalgia.

One such nostalgic moment hit me a few weeks ago, for no reason at all.   But I suddenly had the urge to climb aboard and cast off.   Not some rhetorical urge you have to understand, this was the real thing.

You see, when I was a kid, I would trawl through the Hoseasons and Blakes brochures trying to convince my mum and dad to take us on a boat for our holidays.  I was never sure why they didn’t fancy the idea.   Maybe they didn’t like water.  My dad never really had the same urge to wander down the lock at Gunthorpe and drool over the cruisers in the same way that I did.

So, when I was old enough, I opened the Hoseason’s brochure and picked a boat out, and convinced my (then) girlfriend Sue that it would be a great adventure.  It was also the first holiday I ever booked myself, which was an exciting experience in its own right – well before the days of the internet and credit cards, everything was done over the phone, posting the booking forms and paying with cheques.

We made the long drive to Norfolk (up until now we had considered Skegness a trek)  and arrived in the beautiful little town of Beccles, where we picked up our boat “Starways”.    Much like the one below, (we don’t seem to have any photos left from that time, although I took a few rolls of slide film), we had a very quick lesson in boat handling and then we set off under the Beccles road bridge on our way to Great Yarmouth.

This was our first real holiday on our own, and I think by the end of it we had grown as a couple.  It was an adventure, and despite a few teething troubles, we had a great time and were truly hooked on the tranquillity that came with bobbing along on the broads, and truly hooked on spending time with each other.

Showing the photos to my Grandad, he was enthralled with the idea of seeing all the nature, and both my brother and Sue’s brother were eager to go boating, as was Sue’s cousin.   So before long we were booking another cruiser, but this time we went executive, with the newly built 45ft Connoisseur cruisers, a huge 8 berth which at the time was the largest boat on the broads, and only second largest on all the UK waterways.

It fell on Sue to do most of the cooking, helped along with my grandma wherever possible, we promised faithfully to look after the boys (Ok we had a couple of scary moments) and along with our CB buddies we took off on what was probably the broad’s first ever floating “convoy”.

Throughout your life, you will do little things that you know mean a lot to someone else, and i know Grandad had one of the best times ever, sat on his elevated bench, Captain’s cap on and binoculars firmly in hand spying the kingfishers and herons along the way.

Next up was my brother and sister in law, who joined us with the little ones and had an excellent week on the Aston Songbird, out of Loddon.

Having recently moved in to a new house, we found our neighbours were also boat lovers, and before long we had ourselves another mini convoy – I took my mum and dad and the girls, the neighbours took their mum and dad with them and their own kids.   Slight logistical problems as we booked boats from adjacent yards, but we were soon  underway and meeting up with them just off the tributary out on the main river. 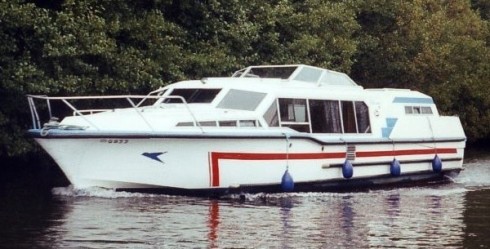 Dad really loved this holiday (I think) and he really got into the boating experience as I taught him the effects of tides, current and wind, and he mastered stern on mooring and cleaning the weed out the water inlet filters.  It’s great having a couple of boats following each other around, we used to park up at night, get the BBQ’s out followed by the fishing rods and beers – and life was good.

We were getting quite the experts now at cruising the broads.  River boating isn’t all plain sailing (sorry) – there’s a lot of technique involved in manoeuvring a boat around, and we soon had a wealth of experience under our belts regarding such things as tides, how rivers work (like the shallows round the inside of bends and faster flowing water on the outsides), and we often found ourselves lending a helping hand to novices.  We would never watch anyone struggle.

When Sue’s brother met his partner, we found yet another boating enthusiast, and that was just the prompt we needed to get the deck shoes out and set off again for yet another waterborne adventure.

A common theme with my choice of cruisers was that it had to actually look like a boat, and you had to be able to sit outside and enjoy the “sea” air as you cruised along the waterways.    So many of the boats at the time were basically front steer floating caravans, which just held no appeal for me.

My only problem now was I had serious competition at the helm – after all, this was MY ship. I’m the Captain, and I’m facing a veritable mutiny! (Well a queue if nothing else).

So, I’m thinking now, is this something that I could enjoy with my grandkids?  I know how much my own girls loved feeding the ducks, playing on the fields surrounding the broads, and later on, grabbing their fishing rods and seeing who could catch the first fish.     Is there ever going to be the opportunity to re-live this experience or is it just a distant memory never to be enjoyed again?

Give it a couple of years and I think the grandkids will be old enough to be trusted on a boat.  I can easily envisage my own girls wanting to tag along with their partners, and be masters of their own vessels at last.  It would be an awesome adventure.

I know we are a lot older now, and getting on and off isn’t the simple hop on/ hop off it used to be.    But I’m sure we could find the right boat that suited us all.

A couple of years ago we were holidaying in Norfolk with Stacey, Chris and the girls, and my mother and Sue, and we risked hiring a small day boat for a few hours to see if it still had the appeal.   I can safely say that everyone had a great time and enjoyed bobbing along on the river once more.

So, who knows?  I’m not dropping anchor just yet.

2 thoughts on “Afloat but not adrift.”